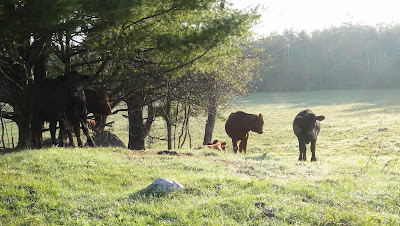 So the cows head off tomorrow.  It is always a rush of emotions when it is time to send the animals to West Gardiner.  We spend a lot of time with the animals: moving, feeding, scratching, sharing an evening beer.  I can't imagine having a farm without them.  I sometimes think I should be a vegetarian but my body tells me otherwise.  I feel good that these creatures have spent their days with us.  Happy, outside, grazing and being who they are, be it a cow, pig or turkey.  Still, I am always sad to see them go. Not just sad though, grateful as well...blessed and bountiful.
I give thanks.
(Especially if they load into the trailer with ease tomorrow.)
PYO Pumpkin Party
THIS Saturday the 1st of October
Wagon Rides to the pumpkin patch at 11 am!!!
This Week's Loot:  I am not entirely sure actually.  It has been a crazy week (and it is only Monday!)  But I promise there will be some veg including carrots and a winter squash : )
﻿
Posted by Little Ridge Farm at 7:05 PM No comments:

Thank you to all who physically support Little Ridge Farm!!! 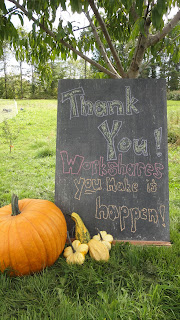 This weekend we had a "Tribute to Workshares" lunch.  Every year I have about 7 families who send someone out for 2 hours a week June into October.  I try not to make them do the hardest work on the farm, but certainly they earn their discount.  It's a great experience for one to learn first hand how the farm works and to get dirty.  I RELY on these folks to make the farm work and every year it has been a very positive and rewarding experience.  So a big THANK YOU to all who have pulled, picked, hunched, sifted, pounded and sweat for our food! 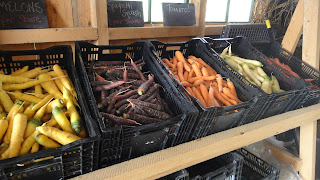 As they say "don't put all your eggs into one basket".  So this year I decided to expand the amount of wholesale food I sell.  I pick items that I do not grow for the CSA so there is no question as to which is for wholesale and which is for CSA.  I grow a "carrot medley" (a mix of red, yellow, purple, white and orange) for Crown of Maine.  They are a family created cooperative that buys from farmers in Maine and then redistributes the goods into New England. 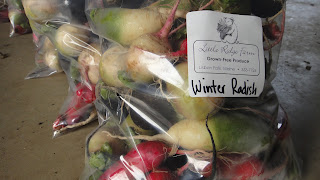 For them I also grow an assortment of winter radish.  They are spicy like regular radishes but bigger, different colors and can be stored into winter.  And then I grow storage carrots for the Good Shepard Food bank.  They received a grant so that they could actually buy fresh food from farms rather than relying on donations.  It's a win win, as the farmers get paid and the food bank gets a consistent higher quality product.
With selling wholesale comes lots of washing, sorting and packaging.  It is AMAZING how much food would potentially get discarded.  Understandably so, restaurants want all their veggies to be uniform and perfect from top to root.  No forks, blemishes, twists.....Well we all know how we love our dancing carrots!!!  So this is where you come in.  So I do not waste all of the "2nds", I will offer them in the share. This is the ONLY time you gets 2nds.  So keep your eyes out for some spicy color in the next few weeks.
PYO PUMPKIN PARTY and POTLUCK October 1st from 11-2.
Don't miss out on finding the perfect pumpkin!!! We will take a wagon ride out to the patch at 11 am and them return for a potluck lunch!
This Week's Loot: carrots, potatoes, beets, peppers, chard, dill, sage melons (full share)
Posted by Little Ridge Farm at 11:41 AM No comments: 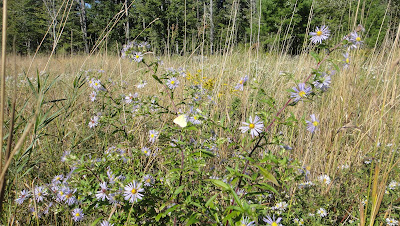 Asters and goldenrod flood the fields... 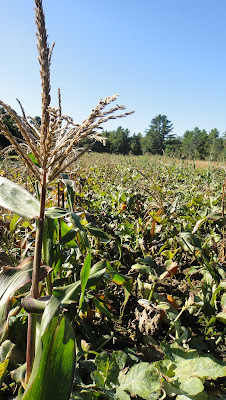 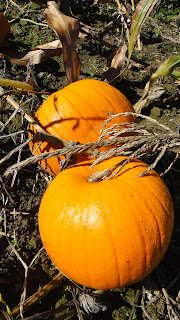 The corn is finished and pumpkins pop out beneath the cover. 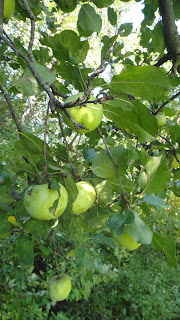 And apples are the fruit of choice.

The air is crisper, the sky bluer, even the sounds are a reminder that fall is here.  Can't believe it really.   I still sort of feel like I am waiting for summer to arrive.   I mean I know it was the hottest and most humid summer on record (or if it wasn't, my count of sleepless nights make it seem like it was), but for some reason I kind of feel like it blew right by.  That is okay, I welcome fall.  I love the colors, the smells the cooler nights.  I like bedding the fields for winter and seeing the colors of pumpkins and winter squash emerge from the withering vines.

This week we will see the first of our fall crops in the share--spaghetti squash.  This squash is canary yellow and has a delicate flavor.  Some folks love it, others not so much.  I like its crunchy texture and its versatility.  Since it is light in flavor, one can add pasta sauce, cheese, pesto, beans and the like to add flavor.  Have fun with creative cooking!

How To Cook Spaghetti Squash
Once the squash is cooked, let it cool for 10 to 20 minutes so it will be easier to handle, before cutting in half (if it wasn't already) and removing the seeds. Pull a fork lengthwise through the flesh to separate it into long strands. (See photos.) You can do these steps ahead of time, then prepare spaghetti squash recipes whenever the mood strikes.

Posted by Little Ridge Farm at 5:54 PM No comments:

Under the Circus Tent 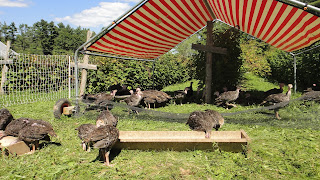 The turkeys are out!  They have enjoyed their tour through the raspberries and now they are moving along the driving paths and ends of fields.  As they get older I have to move them more and more (up to once daily) to make sure they have fresh grass to both eat and lounge on.  On moving day, I take the entire fence down and move it to its new location.  Then I drop a side and wheel their circus lounge to the center of their new pen.  Finally I move their waterer and their troughs.  Meanwhile the turks are "clucking" around exploring new places and chasing bugs.  Once I get the new netting up and their shade moved, I fill up the grain bucket and shake it a bit.  The clucking stops.  The turks stand still for a moment and then a few see the grain bucket and head toward me.  Soon the rest follow and viola they are all in.  The whole process takes about 10-15 minutes.  It all depends on how many good bugs are out there to chase, but as long as I get their attention, grain trumps bugs. 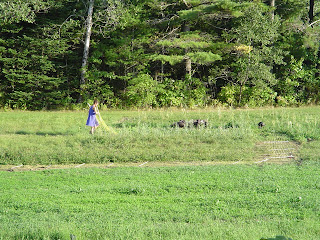 Sometimes I think the turkeys are a pain.  For staters, they aren't the smartest animal on the farm.  For some reason they love to huddle against the fence at night, instead of under their hut for protection.  And if it is raining you can guaruntee they will be out in it getting soaked and sometimes hypothermia.  Something strange happens every year to the birds, some unforseen accidental death.  Raccon, owl, fox, coyote are always worries for me and sometimes in the middle of the night I get out of bed and go out to check on them. 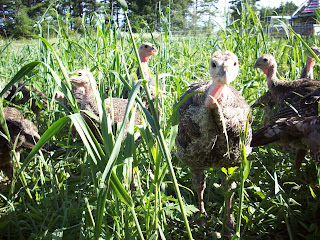 Generally though these featherd hens and toms crack me up.  They have a sound for every mood they are in and I have gotten to know them quite well:

"cluck, cluck, cluck" this is a bit more excitable and higher pitched sounding than a chicken.  It says "I am eating new fresh grass and chasing bugs and I am loving it!"

"cluck, rrrr, cluck, rrrr"  this is a lower pitched cluck with a kind of purring in beetween meaning "life is good" 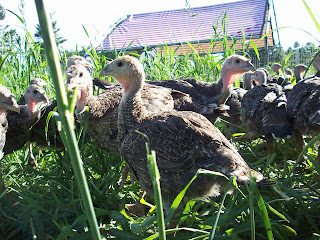 "chirp! chirp! chirp!"  very high pitched yelling "help! help! help!" (generally "Help! I am an idiot and I have gotten myself into some silly situation taht I cannot figure how to get out of"  This call is common when they are very young and still in the barn.

"gobble, gobble, gobble"  you all know what this sounds like.  And I think it says "hey how ya doing?" like a greeting but it is usally done all in unison.  I usually gobble at them to get their attention.  And it works, they usually all gobble back... I think they think I am their mom, or maybe god : )

What is Edamame?   http://www.edamame.com/
Posted by Little Ridge Farm at 6:29 AM No comments: 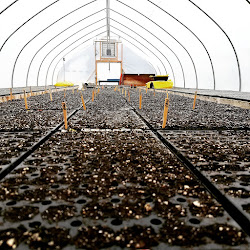