Fall on the Farm 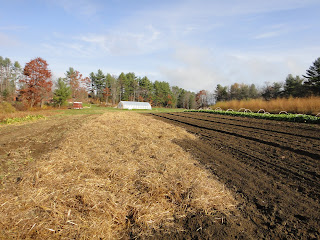 It's been two weeks since I have had a pick up and our daily task list has certainly changed course.  I have already been on a planning path for next year: making field maps, looking at seed varieties...It's been fun, but much of that takes place in front of the computer and days seem to just fly by.  Planning is essential and thankfully fun.  Usually I don't get into the nitty gritty until January, but this year I think my body wanted rest a little earlier than usual.  So after a week of being a computer geek, I headed back outside.
The first task was to fill my little straw barn with straw.  300 bales this year.  Many farmers use black plastic for mulching.  It's cheap, weed free, a solid weed barrier, fairly easy to install (if you have the right equipment) and it heats the soil up, which some crops love.  Straw mulch is very expensive, can be full of weeds, it takes time (and strength) to load/unload/lay and it doesn't serve as a weed barrier if laid too thin.  However it adds great organic matter to the soil, I am supporting another local farmer and at the end of the season I don't have to pull it up and throw away a big ball of plastic trash.  Ah, now that feels nice. 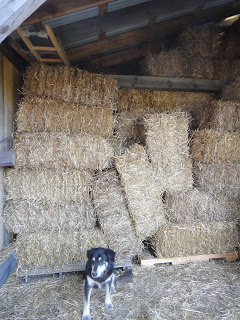 The first photo was of the mulched garlic bed.  I will also use it this fall to cover parsnips and strawberries.  All of these crops need mulch to protect them from heaving out of the ground over the winter and to protect tender berry buds that were formed in the late summer.  I am also thinking of using it to mulch my asparagus this fall as a weed barrier.  We spent near 80 man hours this summer weeding the asparagus!!!  And I am hoping the expense and time mulching will be way less than weeding in the future. 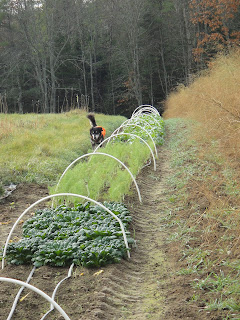 GREENS!  It has been so mild this fall that I have loads of greens for this year's Thanksgiving Share!  Many of these greens were meant to be for the summer share, but for some reason they decided not to mature in time.  So I have been covering and uncovering them for several weeks to try and save them for this week.  And it worked!  Strangely enough the kale, which is supposed to be able to over winter, was severely damaged by the sleet we had last week.  But the pac choi, tat soi, chinese cabbage, kohl rabi, chicory and chard all survived! 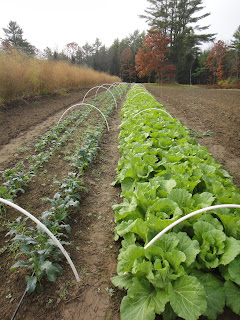 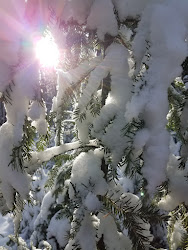