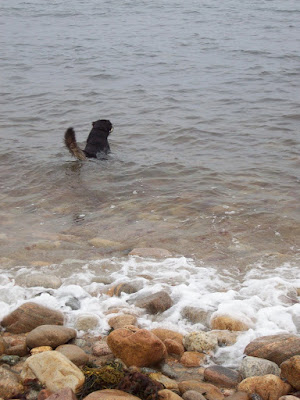 I wanted to take a photo of the glorious strawberries but didn't get to it, so you will just have to go out and see for yourself. It is easy picking right now so don't miss out!!!


Next week will be bring a Friend week, but please come with them and show them the ropes. It keeps my self serve honor system from breaking down.

Alright this one is short--I gotta write this on Sunday so I have a bit more time....maybe next week! But for now I am thankful for the bit of rain we got, plants look happy (except for the decapitated peppers and lettuce due to a deer) and the strawberries are AWESOME!!!! Okay I am off to cultivate (weed with the tractor). ENJOY!

Garlic Scapes
www.2sistersgarlic.com/articles/garlic_scape_recipes.htm
Posted by Little Ridge Farm at 8:05 AM No comments: 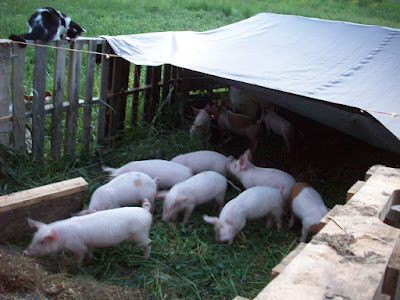 Too cute these little guys and girls. They arrived Monday evening from Midnight Meadow Farm in Saco, Maine. 7 weeks old. Inca was marveled by them...Simon is WAY jealous ;) 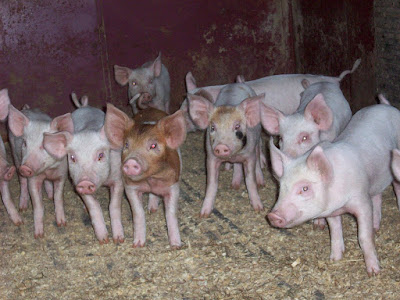 Come say hello but don't be to bold, they are quite skittish still. Be sure to visit the pigs as they move through the pasture this summer...even if they are in the back field, feel free to take a hike!

Gardens are coming along nicely. We received a bit of rain Saturday afternoon and we needed every last drop. Luckily though we have been dodging the hail!

This week's Loot: mustard mix, hakurei turnips and greens, lettuce, spinach, chard, mint, oregano and strawberries!
**Over the next few weeks you will be seeing kohlrabi in the share. (I am picking it as it matures.) It is an alien looking vegetable and was described on the "How to Cook Greens" link on last week's blog.
Mores greens recipes and dressings...

Posted by Little Ridge Farm at 9:02 AM No comments: 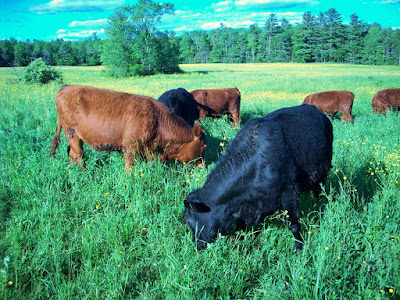 These cows were born in a pasture in Wales, Maine in April of last year. There are 6 steers (castrated males) and 2 heifers (females). This year is the first year I've used this pasture. It is a little wet and needs some nutrients, but I think it is going to work out nice. I can no longer see the cows from my house, but it is a short walk or a quick drive just down the road. The pasture had no fencing and no water system set up so this spring I spent many days walking the 11 acres pounding fence posts and stringing wire. I use a battery operated charger with a solar panel to keep the fence good and hot. Currently I am using water from the farm house there to water the herd, but I am hoping to gravity feed water from a creek in the back of the pasture. (It's halfway set up...) 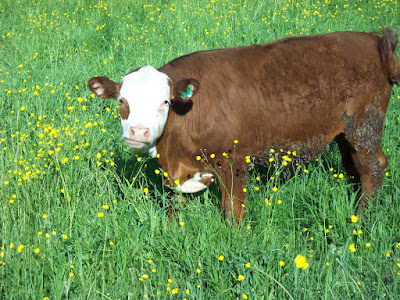 The cows are mostly Devon with a touch of Angus. The Devon breed is from England and was brought to the US in the 1600's as a multipurpose breed (working, milking, meat). Their smaller stature is great for grazing; they process grass and other forage efficiently and make a nice grass-fed finish. Devons are red/chestnut in color...the black in some of mine come from the Angus crossbreeding. A mature cow will weigh about 1000 pounds. Although that is is still a large animal, Devon's are known to be docile. Believe me they still kick up their heels and run a fast clip!!! But in general they are easy to work and move around the pasture.

Ahhhhh, this touch of rain feels nice. I can almost hear the plants and animals singing for the sweet moisture. I can't believe I am saying this after the 2 weeks of rain we had earlier!!! Tomato and pepper plants are in. Corn, squashes and beans seeds have all germinated. These last few days I have seen the potato and bean plants grow. I am always amazed--the strength of those little seeds, pushing through this crazy weather...they keep me inspired with their unending determination.

The insect pressure is high this year all over New England. It's always a weighted decision to spray or not. I have several different non-spray defenses I use for pest control. Mostly I only spray when the survival of the pant is at stake. That being said...you will receive very HOLEY greens this week : ) Flea beetles are little, like a flea, and jump, like a flea, but instead of feeding on the blood of humans, they survive on the juices of plants in the brassica family; broccoli, kale, mustard...

Jump like a flea into the tastes of spring!!!


Check out this AWESOME greens site!!!! You will at some point receive most of these greens throughout this season. It doesn't list tat soi, but it is like across between kale, spinach and pac choi

A very useful herb guide...herb it up!!! (use that tarragon!)


www.herbalgardens.com/herb-chart.html
Posted by Little Ridge Farm at 6:32 AM No comments: 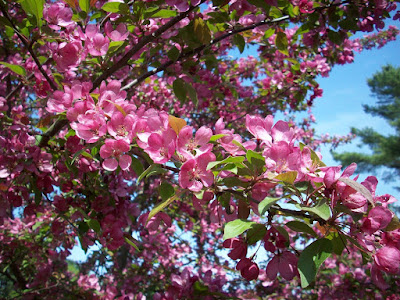 The season seems to be flying by already! I had a seeding spree on Wednesday and seeded greenbeans, summer squash, zucchini, winter squash corn, pumpkins...Ahh it felt good to get it all in--despite getting poured on halfway through! Still some spots are sloppy wet, but this drying wind will help out and make some more of the soil workable. I still feel behind and that things aren't growing very fast, but I think that is partly due to the incredibly early season we had last year. It has spoiled me for life : ) 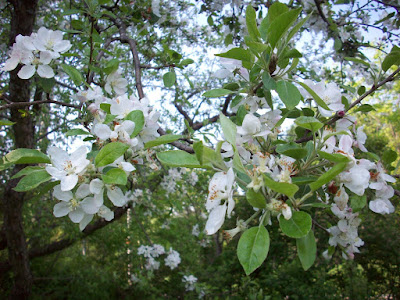 We had a GORGEOUS year for flowering fruit trees. Hopefully the pollinators had time to do their work in between rain events and the flowers will turn into some juicy fruit. We have planted several fruit trees (pear, plums, peaches, cherries and one apple) since we moved here. Many of themn are still young, but severl of them should be ready to set their first fruits! We also uncovered a row of old apple trees. Over the past 5 years, we have been pruning them down to be a more managble size and this year was the best flowering year I have seen. I think they are McIntosh! Although they are still too tall to harvest from, we have cleared out the understory in hopes to pick "drops". 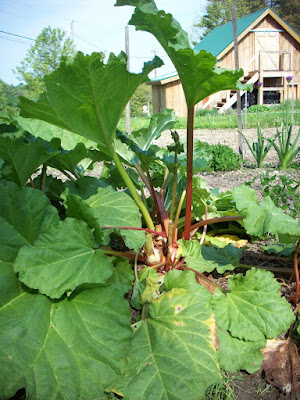 The cows arrived on Monday on they are happily chewing their cud. We had a couple of escapees, but hopefully that will be it for the year! I meant to take a photo and keep forgetting...so you have to look at a photo of rhubarb instead. I am using a new pasture this year which I think will work out great, but I cannot see it from the house. So I have been driving down there a few times a day to check on them. Once they settle in, I should be able to just go once a day. It has been enjoyable visiting them and they are becoming more and more clam--one even lets me scratch him.

I am still not sure when weekly pickups will be maybe starting June 21st--we'll see. Grow spinach grow! For now you can enjoy...
This Week's Loot: Asparagus, rhubarb, parsnips, lettuce, scallions, lemon balm, chives, sorrel

So I have been writing farm notes and attaching recipes to them for 10 seasons now. I am running out of recipes : ) Plus Zach and I don;t really use recipes, we sort make things up. Although I admit I will look at recipes for ideas. Anyway, this year I think I am mostly going to direct you to the places I searched for out weekly meals and hopefully they will inspire you too!

This past week I have been experimenting with rhubarb...I made a rhubarb pit with meringue topping, a rhubarb/sorrel sauce for fish and a read about a roasted rhubarb salad that sounded good, but I haven't got to it yet.

I mostly use it for sun tea or fresh as a lemony garnish, but this website gave me some new insights too: www.superherbs.net/Lemonbalm.htm

What is the difference between leeks, scallions and chives?

Leeks are a vegetable. Sometimes interchangeable with onions, but usually standing by themselves. Leek and potato soup, braised leeks, etc. Green leaves of leeks are very tough and fibrous and not eaten, but are excellent to use in soup stock.

Scallions, aka green onions. Good for salads, baked potatoes, Mexican stuff. Both green and white are used. Eaten raw, you will get the most flavor.

Chives are finer. Excellent for garnishing. No white on this one, only bright green with a nice light onion flavor.

Posted by Little Ridge Farm at 7:59 AM No comments: 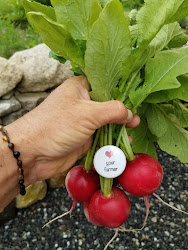 Check out our online ordering platform: